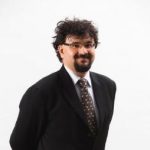 Sanjay qualified as a Chartered Accountant before graduating from Delhi University as Bachelor of Commerce. Beginning his career in 1991 as an Auditor with Messrs A F Fergusons, the Indian Associates of Deloitte, Sanjay has extensive experience in the banking and finance industry, having worked as Corporate Banker in a large Financial services entity in India. His 15 years’ experience in Micro Finance Industry goes back to 2003, where he held positions like Director (Ratings) with M-CRIL, the microfinance rating agency, and CEO at a Cambodian MFI. In the past 15 years, Sanjay has made a niche for himself in the microfinance industry. He has conducted Microfinance ratings for close to 125 MFIs in around 27 countries in Asia; Africa and Eastern Europe, and trained / guided teams of rating analysts to produce more than 400 quality rating reports. He also has experience with projects for the World Bank; ADB; UNDP; Mercy Corps and HIVOS. From 2003 to 2006, Sanjay had worked extensively in Myanmar on the UNOPS Microfinance Project in the Delta region (which later became part of PACT Global Microfinance). Sanjay speaks English, Hindi, and Punjabi.